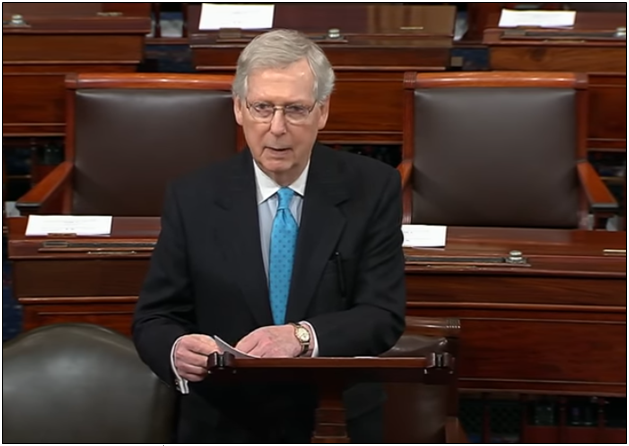 Senate Minority Leader Mitch McConnell (R-Ky.) has all but declared Senate Democrats’ latest proposed version of S. 1 — legislation that would nationalize election law away from the states — dead on arrival in the U.S. Senate.

Under regular order, Democrats will need at least 10 Senate Republicans to sign on to the new plan, but so far, McConnell and the Senate GOP appear to be holding the line.

“Senate Democrats seem to have reached a so-called ‘compromise’ election takeover among themselves,” McConnell noted in a June 17 statement, amid political reports that Democrats are presently attempting to court moderate Republicans in the Senate.

But so far, besides Sen. Lisa Murkowski (R-Alaska), who has already co-sponsoring legislation to reinstate Justice Department oversight of state election law, no other Senate Republicans have declared any support for Democratic election legislation in the Senate.

Which is little wonder. According to McConnell, the new and improved S. 1 is just as bad as the old S. 1: “In reality, the plan endorsed by Stacey Abrams is no compromise. It still subverts the First Amendment to supercharge cancel culture and the left’s name-and-shame campaign model. It takes redistricting away from state legislatures and hands it over to computers. And it still retains S. 1’s rotten core: an assault on the fundamental idea that states, not the federal government, should decide how to run their own elections.”

That doesn’t sound like something most elected Republicans could possibly support, and so it probably won’t reach 60 votes.

McConnell’s statement came as Sen. Joe Manchin (D-W.Va.) has come on board Senate Majority Leader Chuck Schumer’s (D-N.Y.) latest push in an attempt to woo Republicans with an apparent bid to water down the original legislation.

In a recent effort, Manchin has draft a memo outlining what he would support in an election bill, included expanded absentee mail-in ballots, removing state legislature powers on redistricting and restoring DOJ oversight of state election laws.

The memo followed a June 14 meeting called by Manchin and “attended by GOP senators as well as civil rights groups” to discuss a potential compromise, Politico’s Laura Barron-Lopez, Marianne Levine and Burgess Everett reported on June 16.

Sen. Graham explained his presence as a favor to Manchin: “I did it because I was asked by Sen. Manchin… We have differences on S. 1 but I’d like to make voting easier. Maybe have some uniform standards on how you do mail-in balloting. There might be some things we can do … He’s always trying to find a way forward on stuff.”

But that doesn’t mean any compromise was reached at all, McConnell noted after Manchin released his memo of what he would support.

What it does mean is that if McConnell and Senate Republicans hold the line, this bill is going nowhere fast.