A new study confirms that liberal blue states like New York and New Jersey had by far the worst pandemic record in terms of keeping people healthy and minimizing economic damage. The consulting firm Hamilton Place Strategies tells us just who did best on both measures.

As a nation, 13 jobs were lost for every person who died from COVID-19 in the past year. The study finds that New York had the worst overall outcome, with both high excess deaths and high job losses. The Empire State, under Gov. Andrew Cuomo’s leadership, instituted severe lockdowns and suffered catastrophic loss of life. Its unemployment was the nation’s second highest – behind Hawaii. Cuomo’s lockdown destroyed much of his local economy while his decision to send COVID-19 patients into nursing homes increased the number of deaths in them. How the media celebrated this Master of Disaster for as long as they did shows just how flawed their coverage of the pandemic has been.

Those with the best result were Idaho, Utah, and West Virginia all with some combination of low loss of life and low loss of employment.  And Florida?  In the middle on both dimensions.

From the Hamilton Place Strategies report:

To evaluate individual state responses to the pandemic, we took a look at two of the major considerations in balancing the response: jobs and deaths. Ultimately, policymakers wanted to keep as many people from dying and as many people from losing their jobs as possible. Unfortunately, these goals were sometimes naturally at odds throughout this pandemic.  Jobs that require close proximity to others (for either employees or customers) resulted in greater COVID-19 spread, and thus more deaths.

To explore the trade-offs that were made, we plotted states by their per capita excess deaths using CDC data against the BLS data on their per capita job losses over the past year. Excess deaths as a measure should generally control for age and demographic differences between states and capture other dimensions of the pandemic like deaths of despair or undiagnosed COVID deaths (of note, North Carolina’s death reporting has a significant lag and so we used reported COVID deaths for that state data; there is a lag in death data generally that complicates analysis).

New York, which falls into both categories, had the worst overall outcome, with both high excess deaths and high job losses. 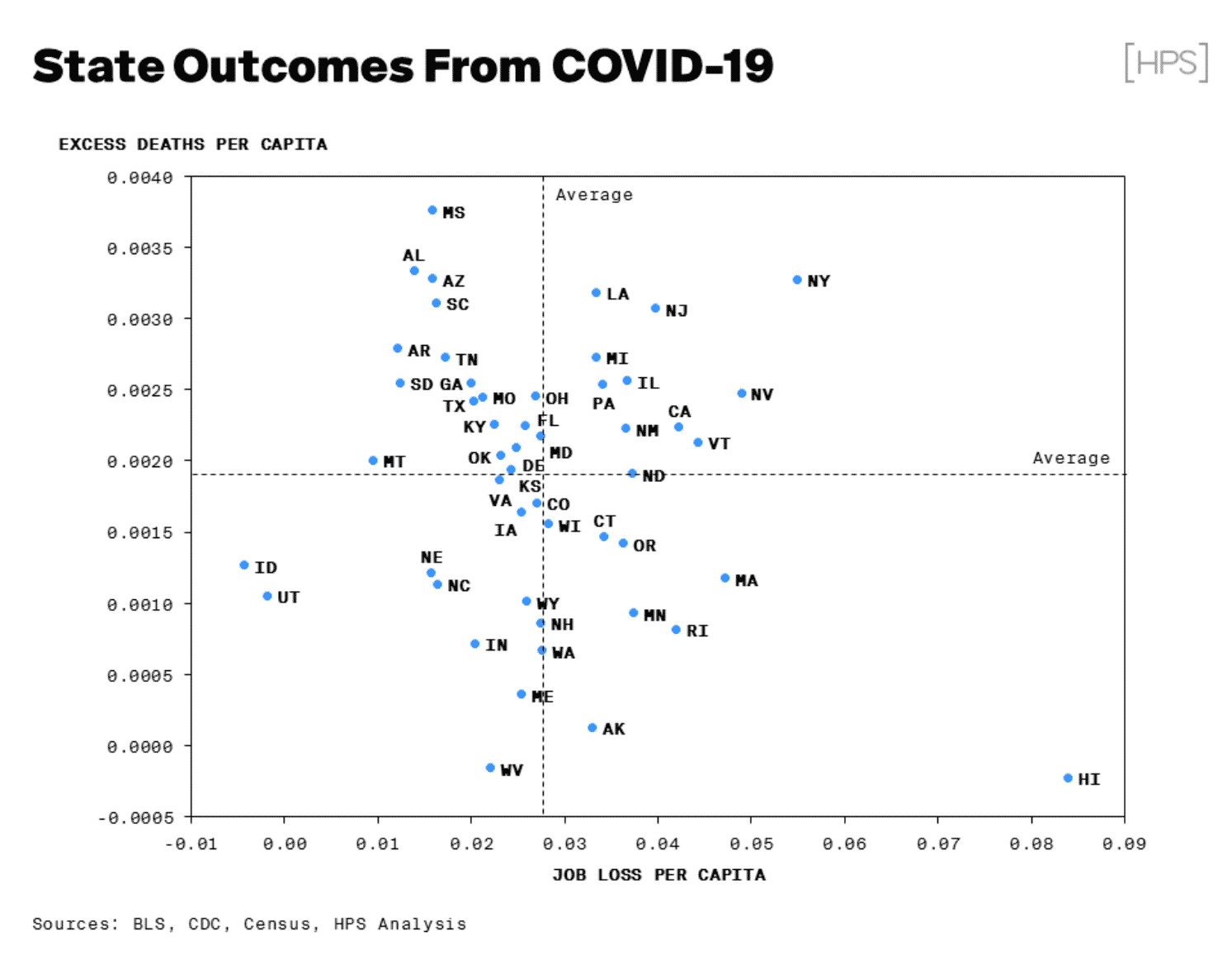 What is the lesson to be learned from this from the different state responses and outcomes?  When given maximum freedom and limited government, individuals will make the right choices because individuals are far better equipped to make choices for themselves than are government elites.