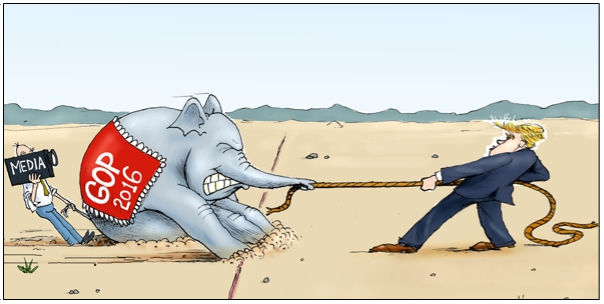 The Trump reckoning in the GOP was going to come to a head one way or another, where Republican leaders would have to choose between their own constituents’ interests or corporate monied interests whose agenda was at odds with grassroots Republicans.

“I didn’t even know the Chamber was around anymore.”

That was House Minority Leader Kevin McCarthy’s (R-Calif.) response to Punchbowl News’ question about the Chamber of Commerce being kicked off GOP strategy calls on Capitol Hill.

The split between House Republicans and the Chamber came to a fore in 2020 when the organization endorsed almost two dozen House Democrats in Sept. 2020, but seeds for the parting of ways were planted in 2015 when Donald Trump decided to run for President.

In 2016, when Trump received the Republican nomination to be president, he brought with him a decidedly different take on national issues like international trade and immigration that became a battle for the heart and soul of the GOP.

These were issues the Chamber was deeply at odds with Trump over, which favors cheap labor whether overseas in China or via illegal immigration in the U.S., and which it turned out grassroots Republican voters overwhelmingly agreed with Trump on.

Trump’s position, which favored blue collar Americans, helped him create a national coalition of conservative and union households around a message of competing with and getting tough on trade cheaters like China and Mexico.

That mirrored a poll of 1,950 likely voters conducted on behalf of Americans for Limited Government by Pat Caddell in 2016 that found 59 percent of Republicans agreeing that “Over last two decades, free trade agreements signed by the U.S. were more of a benefit to other countries.”

That key insight by Trump is how he won the nomination and ultimately the presidency in 2016 in Rust Belt states like Pennsylvania, Michigan and Wisconsin, by speaking to issues that had been long forgotten in national discourse or merely paid lip service by candidates.

Trump became the emblem with which to fight against an entrenched establishment that he successfully argued was looking out for foreign interests and resulting in bad deals for America.

Americans for Limited Government President Rick Manning said of the rift between the House GOP and the Chamber of Commerce was inevitable given the Chamber’s support of woke diversity and inclusion agendas: “This is about a complete rejection of their corporate crony globalism that leaves America second to their Chinese masters.  This is about woke multinational corporations attacking American values. The GOP figured out that the Chamber supports those who oppose their corporate interests and opposes those who support them.”

In other words, the Trump reckoning in the GOP was going to come to a head one way or another, where Republican leaders would have to choose between their own constituents’ interests or corporate monied interests whose agenda was at odds with grassroots Republicans.

It is less a question of whether Republicans support businesses in general, whether via lower taxes or less regulation, but whether global corporate interests are capable of acting in U.S. interests.

Clearly, McCarthy no longer sees the party’s interests as aligning with the Chamber’s and that is a remarkable break.

This was the battle Trump won in 2016, and five years later, even after Trump’s single term in office, whether he runs again in 2024 or not, now it looks like his victory will be permanent.