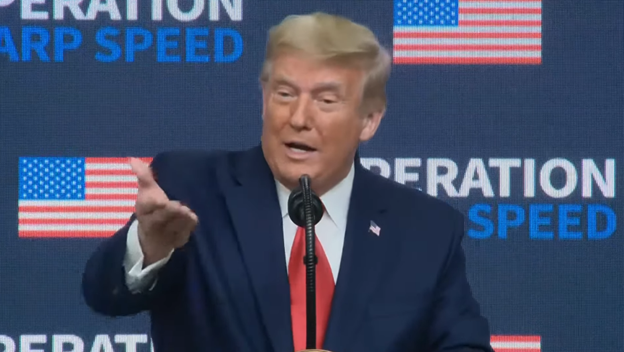 The differences on public opinion of the Covid vaccine the nation is witnessing are mostly partisan, and appear to be a direct result of the Covid pandemic itself and particularly its national political response, a comparison of public surveys on vaccines conducted before and after the pandemic show.

As recently as 2015, 89 percent of Republicans and 87 percent of Democrats (and 83 percent of adults) were of the view that measles vaccines are safe to give to children, according to a Pew Research survey.

In 2018, a Research America/Zogby Analytics poll found 92 percent of U.S. adults who said vaccines were either very important (70 percent) or somewhat important (22 percent) to the health of society.

Similarly, in 2019, a Harvard T.H. Chan School of Public Health survey found 84 percent of parents had never delayed administering vaccines to their children. 15 percent said they had.

Whereas, when it comes to Covid and its vaccines, a Kaiser Family Foundation (KFF) survey taken on Aug. 4 reports that 89 percent of Democrats say they’ve already received the Covid vaccine or plan to do so “as soon as possible,” compared with 56 percent of Republicans and 67 percent of independents.

That is higher than in Sept. 2020, before the election, when Kaiser reported 77 percent of Democrats saying they would definitely or probably get the vaccine, compared to just 67 percent of independents and 47 percent of Republicans.

So far, 198 million doses have been administered, 59.8 percent of the total population, including 168 million who are fully vaccinated, or 50.8 percent, according to the Centers for Disease Control.

So, pre-Covid, vaccines were relatively uncontroversial and easily administered across party lines, but just nine months into the Covid pandemic and its brand of vaccines that have been produced, the breakdown had become partisan — a split that persists to date.

The question is: Why? That is, why were vaccines previously a non-political question, but now they are? It requires a political explanation.

The simplest explanation is the reason we are seeing a political outcome in public opinion is because of the virus response itself became politicized in the 2020 presidential election cycle.

It could be the virus response itself — lockdowns, school closures, masking, social distancing, etc. — may have become viewed as partisan political issues, with Democrats favoring more aggressive measures and Republicans opposing them. Thus, support for the vaccine became wrapped up in support for the national political response, which included things like lockdowns.

Meaning, if you opposed the national political response to the pandemic — including the Covid restrictions — you were more likely to oppose the vaccine which it produced.

Readers will recall in March and April 2020, the hysterical partisan media reporting on the virus response by the former Trump administration geared at agenda setting and priming the issues of 1) gaps in public testing for the virus; 2) whether there would be enough hospital capacity for Covid patients; and 3) whether there would be enough ventilators for Covid patients, leading to a Defense Production Act declaration by former President Donald Trump. All Covid deaths were attributed to Trump’s leadership, or lack thereof.

In the meantime, media and political pressure was applied to mostly Republican governors over the state of lockdowns throughout 2020, another campaign that continues to date. If a state was relatively more open than, say, San Francisco or Manhattan, then the coverage was equally vicious, attributing Covid fatalities to the Republican administration.

Additionally, potential treatments supported by Trump, including hydroxychloroquine, became controversial after the FDA rescinded its emergency use authorization in June 2020.

The vaccine’s development itself, Operation Warp Speed, touted by Trump during the campaign, also caused splits in public attitudes.

In Sept. 2020, a KFF Health Tracking Poll found that 62 percent of Americans thought “political pressure from the Trump administration will lead the FDA to rush to approve a coronavirus vaccine without making sure that it is safe and effective…”

New York Democratic Gov. Andrew Cuomo in remarks on Nov. 17, 2020 continued this theme even after the election, promising he and other blue states would slow up distribution of the vaccine even after it is approved, stating, “nobody is going to trust him saying it’s a safe vaccine. But you’re going to see this play out, they’ll do what’s called an emergency authorization by the FDA… I think that could happen as soon as January where the FDA, because Trump will push them, will say we authorized the drug for emergency use, and you could see it starting in January before Biden gets into office and that’s why I’m pushing so hard to make sure that we have a process in place to check what the FDA says before people start getting the vaccine in New York.”

Throughout 2020, the virus response was cast through a political lens and used as a cudgel against former President Trump. Soon, as noted above, by Sept. 2020, Republican attitudes towards the response soured, including the restrictions and the vaccine.

“By then, the nation had already gone through six months of the health care establishment flip flops on everything from testing to masks to stopping air travel from heavily infected areas, and in the politicization of Covid by the dominant media in an election year to take down former President Trump made many Republicans highly skeptical of anything they said or produced, whether it was lockdowns or vaccines,” said Americans for Limited Government President Rick Manning.

On the issue of inconsistent messaging on masks — first it was no, then yes, that the reason they said no was because the government did not want to run out of masks, that if you got the vaccine, you could take off your mask, and finally, now, even with the vaccine, you need a mask. Throughout 2020, this was a partisan issue as well, with whether there would be mask mandates or not, both at the federal and state levels. Republican governors were hammered over the issue.

And then, there is the seeming cover up of the potential Wuhan lab origins of the virus itself. Former President Trump cited U.S. and Five Eyes intelligence that the virus might have been the result of possible gain of function research in China that was funded by the National Institutes for Health. Unfortunately, this too became a partisan issue, with the establishment media ridiculing the notion, only to see virologists and intelligence agencies pushing back in support of the idea in 2021 after the election.

Before the election, the Wuhan lab was a wild conspiracy theory, apparently because it might help Trump make a case against China politically. After the election, with Trump safely defeated, it was safe to research the possibility. This redounds upon the credibility of the vaccine itself, too. If officials would lie about masks or the origin of the virus for political reasons, might they lie about the vaccine, too? It looks bad.

Moreover, the decision of whether to wear a mask or take the vaccine becomes a means of civil disobedience.

It would not be unprecedented for restrictions to breed its own opposition. Take the military draft in the 1960s. When the Vietnam War began, a method of avoiding the draft was to go to college, but in 1971, Congress and then-President Richard Nixon ended deferment for college students, sparking national controversy. Overall, the draft ultimately made public support for the war untenable. In 1973, Nixon ended the draft altogether. Whereas in the contemporary War on Terror, an all-volunteer military made support to the deployments in Afghanistan and Iraq easier to sustain, since it could be argued those that served wanted to be there, which is one reason why they lasted almost 20 years.

Sometimes, the more restrictive a policy is, the more obligatory public participation, the less popular it becomes. The Covid consensus has been broken.

In this case, Trump lost the election, and so then the onus of administering the vaccine falls on President Joe Biden and his administration. As the year wears on, Biden will find that a virus response that only serves half the country won’t work. The question is that now that public trust has been lost, can Biden regain it?