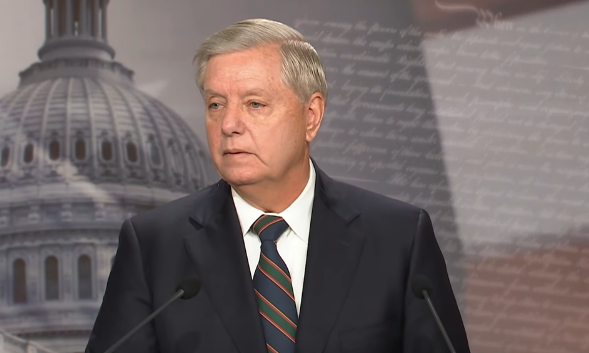 “It is not a capability problem, but a problem of will.”

That was Sen. Lindsey Graham’s (R-S.C.) assessment of President Joe Biden — and his apparent lack of will to fight to save the thousands of Americans and thousands more Afghans seeking to flee the Taliban in Afghanistan.

As of this writing, at least 12 American servicemen have been killed at Kabul airport by terrorist bombings in an attack being attributed to Islamic State.

Ronald Reagan once said “Peace through strength.” That is because weakness is provocative.

Does Biden lack the will to lead America at war?

On Aug. 20, Biden warned the Taliban: “look, we’ve made clear to the Taliban that any attack — any attack on our forces or disruption of our operations at the airport will be met with a swift and forceful response.”

Well, where is the “swift and forceful response”?

By failing to provide, first, air cover to the Afghan security forces this spring, when the Taliban’s new offensive began in early May, second, to keep Bagram air base open to keep the Taliban at bay while Americans and Afghans who wanted to leave, and, third, failing the first two, then to clearly establish a perimeter around Kabul airport, the U.S. has served up Afghanistan on a silver platter to the Taliban.

Now, after more than 18 months without an American casualty in Afghanistan, Americans are once again dying. But it’s worse than that.

Biden is painting a target on every American ally throughout the world: South Korea, Taiwan, Israel, the Arab states and those yearning for freedom in Hong Kong, Venezuela and Cuba. This absolutely emboldens, not just the Taliban, Islamic State and al Qaeda, but greater powers like China or Russia.

This is a pivotal moment. If Biden is unwilling to use force when our men are dying, he really has no business being the Commander-in-Chief. The number one job of any president is to protect America.

This unquestionably makes the world a more dangerous place.

When America says that it lacks the will to fight, that is, once you give up the credible threat of the use of force, you will be swarmed by your enemies.

That is why at least 12 Marines are dead in Kabul right now, with the death toll mounting.

“The minute Joe Biden let the Taliban dictate the Aug. 31 withdrawal deadline, the die was cast, and they were in control of not only Afghanistan, but also every American and Afghan who is stranded there. They are effectively hostages,” Manning said.

“The first thing Biden should do is consult with our allies who have boots on the grounds, and then he should announce that the withdrawal deadline is no longer valid and we’re going to commit to getting every American and American ally out of there, no matter how long it takes. Put more troops on the ground and fight, retake the Bagram air base. You do not kill Marines and not pay a horrific price,” Manning added.

Just last week, Biden promised to respond with force. Republican lawmakers like Sen. Graham are urging him to retake Bagram air base to help provide an alternative departure for Americans and Afghans stranded across the countryside. Additionally, the situation in Kabul clearly requires more manpower to secure the perimeter and civilians surrounding the airport seeking exit.

Should the military depart next week without getting every last American and American ally out of there, the U.S. is risking not only a massacre in Afghanistan, but provocations across the world as the freedom and security of America’s allies are tested. This situation is dire. Aug. 31 isn’t going to fly anymore.