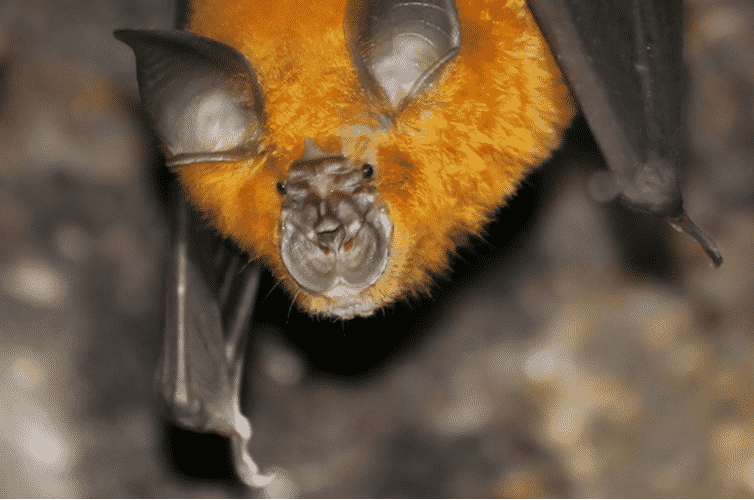 The National Institute of Allergy and Infectious Diseases (NIAID) via the National Institutes for Health (NIH) beginning in 2014 funded research with $666,442 to the EcoHealth Alliance to study in China “bat-CoV serology against human-wildlife contact and exposure data to quantify risk factors and health impacts of SARSr-CoV spillover” and to “use S protein sequence data, infectious clone technology, in vitro and in vivo infection experiments and analysis of receptor binding to test the hypothesis that % divergence thresholds in S protein sequences predict spillover potential,” according to the grant award from NIH.

The funding was cut off in May 2020 by former President Donald Trump at the outset of the Covid pandemic amid concerns about “gain of function” research of chimera, or mutated corona viruses at the Wuhan laboratory that could have possibly been the origin of the corona virus.

In questioning from Sen. Rand Paul (R-Ky.) on May 11, Dr. Anthony Fauci, who heads the National Institute of Allergy and Infectious Diseases stated “[The] NIH has not ever and does not now fund gain-of-function research in the Wuhan Institute of Virology.”

When Paul asked if “Covid 19 could not have occurred through serial passage [a method of creating a virus] in a laboratory,” Dr. Fauci stated, “I do not have any accounting of what the Chinese may have done and I am fully in favor of any further investigation of what went on in China,” and added, “However, I will repeat, the NIH…categorically has not funded gain of function research to be conducted in the Wuhan Institute of Virology.”

Perhaps Wuhan was not funded directly. However, as reported The Wire’s Nicholas Wade on May 10, after receiving the funds, the EcoHealth Alliance then subcontracted the work to Dr. Shi Zheng-li of the Wuhan Institute of Virology.

Wade noted: “[Dr. Shi’s] work was funded by the National Institute of Allergy and Infectious Diseases (NIAID), a part of the U.S. National Institutes of Health (NIH). And grant proposals that funded her work, which are a matter of public record, specify exactly what she planned to do with the money. The grants were assigned to the prime contractor, Dr. Daszak of the EcoHealth Alliance, who subcontracted them to Dr. Shi.”

In fact, Shi and EcoHealth’s relationship goes as far back as 2013, according to EcoHealth’s website, when she co-authored a study with Dr. Peter Daszak on novel corona viruses including SARS that was published in 2013 by Nature.com, that time funded by USAID.  And the research being conducted by Daszak and Shi more recently by NIAID was in fact “gain of function” mutation research, The Wire’s Wade reports.

Referring the NIAID grant that began in 2014 given to EcoHealth’s use of “S protein sequence data, infectious clone technology, in vitro and in vivo infection experiments,” Wade explained: “What this means, in non-technical language, is that Dr. Shi set out to create novel corona viruses with the highest possible infectivity for human cells. Her plan was to take genes that coded for spike proteins possessing a variety of measured affinities for human cells, ranging from high to low. She would insert these spike genes one by one into the backbone of a number of viral genomes (‘reverse genetics’ and ‘infectious clone technology’), creating a series of chimeric viruses. These chimeric viruses would then be tested for their ability to attack human cell cultures (‘in vitro’) and humanised mice (‘in vivo’). And this information would help predict the likelihood of “spillover,” the jump of a corona virus from bats to people.”

Wade added, “The methodical approach was designed to find the best combination of coronavirus backbone and spike protein for infecting human cells. The approach could have generated SARS2-like viruses, and indeed may have created the SARS2 virus itself with the right combination of virus backbone and spike protein. It cannot yet be stated that Dr. Shi did or did not generate SARS2 in her lab because her records have been sealed, but it seems she was certainly on the right track to have done so.”

Wade quoted Richard H. Ebright, a molecular biologist at Rutgers University, stating that the virus could have resulted from this research, “It is clear that the Wuhan Institute of Virology was systematically constructing novel chimeric corona viruses and was assessing their ability to infect human cells and human-ACE2-expressing mice… It is also clear, that, depending on the constant genomic contexts chosen for analysis, this work could have produced SARS-CoV-2 or a proximal progenitor of SARS-CoV-2.”

Making matters worse, Wade reports, not only was Daszak awarded funds to conduct that type of research, he actually followed through with it.

In a Dec. 2019 interview, Daszak admitted that Wuhan was cooking up chimera coronaviruses with federal funding: “we have now found, you know, after 6 or 7 years of doing this, over 100 new SARS-related corona viruses, very close to SARS… Some of them get into human cells in the lab, some of them can cause SARS disease in humanised mice models and are untreatable with therapeutic monoclonals and you can’t vaccinate against them with a vaccine. So, these are a clear and present danger… I think … corona viruses – you can manipulate them in the lab pretty easily. Spike protein drives a lot of what happen with corona virus, in zoonotic risk. So you can get the sequence, you can build the protein, and we work a lot with Ralph Baric at UNC to do this. Insert into the backbone of another virus and do some work in the lab. So you can get more predictive when you find a sequence. You’ve got this diversity. Now the logical progression for vaccines is, if you are going to develop a vaccine for SARS, people are going to use pandemic SARS, but let’s insert some of these other things and get a better vaccine.”

Clearly, NIH and NIAID used federal funding to study bat-to-human Covid virus transmission in China through the EcoHealth Alliance, which, if Wade’s reporting is accurate, was then subcontracted to Dr. Shi of the Wuhan Institute, utilizing “infectious clone technology, in vitro and in vivo infection experiments” to create chimera Covid viruses, just like the one that is now rampaging the world and has killed 3.2 million people worldwide and counting.

Did Dr. Fauci perjure himself and lie to Congress?

Technically, he can say NIAID gave the money to EcoHealth Alliance, not to Wuhan directly, but was he was aware of Ecohealth’s relationship to Dr. Shi and the Wuhan lab? If so, why conceal the obvious relationship with Wuhan in his testimony to Congress? Why not clarify it? Here, Dr. Fauci does himself no favors.

Were the grants starting in 2015 being used to circumvent NIH’s 2014 moratorium on “gain of function” research? Probably not. The original grant came in May 2014, and the moratorium on no new funding for the research came in Oct. 2014.

The existing funding was merely “encouraged” to “voluntarily” pause the research: “we will encourage the currently-funded USG and non-USG funded research community to join in adopting a voluntary pause on research that meets the stated definition. The deliberative process that will ensue during the period of the research pause will explicitly evaluate the risks and potential benefits of gain-of-function research with potential pandemic pathogens.”

So, there’s really no reasonable motive to conceal this information from Congress. The money to Dasnak and EcoHealth was already out the door when the moratorium was imposed, so why risk perjuring oneself unless there is something to hide?

In 2020, NIH published an editorial by Michael J. Imperiale and Arturo Casadevall re-evaluating “gain of function” research. On whether the Wuhan lab was suspect in cooking up Covid, the authors suggested it was a conspiracy theory, “At this time, the scientific consensus is that the virus emerged as a zoonosis whereby it jumped from an animal host, possibly bats or pangolins, to humans, and arguments about a laboratory origin for SARS-CoV-2 are more akin to a conspiracy theory than to a scientifically credible hypothesis.”

But, Imperiale and Casadevall added, “In the very unlikely event that SARS-Cov-2 had emerged by accidental escape from a lab, however, that would be a great cause for concern because the Wuhan facility was state of the art and presumably operating with a high degree of care.”

Now, with Wade’s reporting, this “very unlikely event” becomes a real possibility that must be thoroughly explored.

As Wade noted, “The lab escape scenario for the origin of the SARS2 virus, as should by now be evident, is not mere hand-waving in the direction of the Wuhan Institute of Virology. It is a detailed proposal, based on the specific project being funded there by the NIAID… One can only imagine Dr. Daszak’s reaction when he heard of the outbreak of the epidemic in Wuhan a few days later… But instead of providing public health authorities with the plentiful information at his disposal, he immediately launched a public relations campaign to persuade the world that the epidemic couldn’t possibly have been caused by one of the institute’s souped-up viruses.”

Wade quotes Dasnak in April 2020 denying it came out of Wuhan’s or his lab, stating, “The idea that this virus escaped from a lab is just pure baloney. It’s simply not true.” Could Dasnak’s deflections have helped fuel the conspiracy theories?

Maybe Dasnak is right. Who knows? Giving NIH, Dr. Fauci and even the Wuhan lab itself the benefit of the doubt, maybe this strain of Covid did come from the wild and it’s all a coincidence, and Dr. Dasnak and Dr. Shi just happened to be in the right place at the right time — knowing exactly how dangerous these viruses were and racing against time to sequence them so that a vaccine might one day be developed.

And taken a bit further, perhaps this particular research or at least this type of research was in fact critical to developing the current mRNA vaccines we are all now taking and we hope will bring this nightmare to an end.

Maybe Dr. Fauci has a good story to tell. Or maybe the virus really did escape from a lab.

The bottom line is: We don’t know.

Only a full public accounting of this particular research by EcoHealth and Dr. Dasnak will settle this particular matter — and end the conspiracy theories. Congress has every right to investigate, and Dr. Fauci has every obligation to answer. Dr. Dasnak should absolutely be called to testify to Congress as well.

U.S. Rep. Bill Posey (R-Fla.) has called for a bipartisan commission to investigate the origins of the virus. It clearly is needed. While Dr. Fauci says he favors an investigation, so far, he has effectively stonewalled legitimate inquiries with his, at best, shading of the truth.

Conducting a thorough inquiry will either vindicate this type of “gain of function” research — or with 3.2 million dead and counting — potentially consign it to the dustbin of history, alongside Chernobyl’s RBMK reactors.