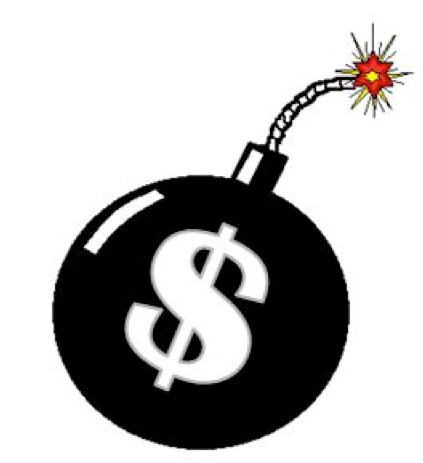 The supply of U.S. dollars as measured by the Federal Reserve’s M2 Money Stock has grown by more than $4.6 trillion since Feb. 2020 when the Covid pandemic began to $20.1 trillion — a gargantuan 29.6 percent increase in the money supply, the largest ever on record.

The surge in new dollars came amid more than $4.95 trillion of new debt since Jan. 2020, $2.7 trillion of which was purchased by the Federal Reserve since then.

M2 has grown on average 6.8 percent annually since 1959. In 2020, that would have translated into roughly $1 trillion annual growth of the monetary base had there been no Covid. Instead, it grew almost $3 trillion more than was expected.

Milton Friedman famously suggested that “Inflation is always and everywhere a monetary phenomenon in the sense that it is and can be produced only by a more rapid increase in the quantity of money than in output.”

Clearly, the additional spending in 2020, with the $2.2 trillion CARES Act, plus the $900 billion phase four under former President Donald Trump, and then President Joe Biden’s own $1.9 trillion Covid stimulus legislation qualifies.

We printed a lot of money, and so we should expect to see some inflation.

And then in April, consumer prices saw their largest surge since the oil bubble of 2008, with 4.1 percent annualized inflation, according to the Bureau of Labor Statistics.

But much of that is prices correcting from a year ago during the short-lived deflation of the Covid lockdowns. In May 2020, consumer prices were barely up 0.22 percent annualized as oil went below zero dollars and consumer spending crashed along with the economy as 25 million jobs were lost.

So, 4.1 percent and 0.22 percent, averaged out over those two years, comes to 2.16 percent annualized. In essence, prices are where they would be had there never been any Covid.

Therefore, at least immediately, in Covid in 2020 we saw a big drop in certain prices, and in 2021, we’re seeing those prices recover to their prior levels. So, no hyperinflation, right?

There are several factors to consider. One that gives me pause is that in the 1970s, peaks in the growth of M2 would often take a few years to transmit into double-digit inflation.

The next peak in M2 was in March 1983 when it grew at 12.8 percent, with the next peak inflation at March 1984 at 4.9 percent as record-high interest rates finally broke the back of inflation. Still, then the ensuing inflation took 12 months to transmit.

Here, we get to the financial crisis, which might be the best example of deficit-spending and quantitative easing to give us information on what to expect in the Covid recovery. In Jan. 2009, M2 grew at an annualized rate of 10.3 percent amid the Troubled Asset Relief Program and the Fed’s new asset purchase program got off the ground, but inflation would only peak at 3.8 percent in Sept. 2011. 32 months.

That is a 20-month average for all those periods, that is, the lag between peak M2 and the peak inflation that followed.

After that, arguably, with the Fed’s policy rate at zero percent, plus the outright monetization of $2 trillion of new debt from 2008 to 2014, the transmissions of M2 increases appeared to be almost immediately felt in consumer prices. I only suggest that because this is where the M2 and consumer price charts appear to converge with one another throughout the Obama years, and as soon as the Fed began raising rates in 2016, the charts decouple.

Perhaps it is a coincidence, or perhaps it is because with the cheap lending by the Fed at near-zero percent, there is less money destruction in place that might otherwise delay consumer prices fluctuating.

This brings us to the Covid recession, when the M2 dollar supply increased at its highest point in Feb. 2021 at 27 percent, and so the question is this: Will the consumer price impact be immediately felt, as in the Great Recession, because the Fed once again has interest rates at zero percent? If so, the April spike in prices off the prior bottom might have been the worst of it.

Or, could the inflation still be on the horizon, say, 20 months into the future as with the pre-Obama historical average? If so, considering this was the greatest amount of money ever printed in such a short span of time more than 28 percent, the spike in prices to come could still be considerable.

Obviously, there are other factors that one might consider through the period following the 1970s of inflation and interest rates dropping significantly, the so-called Great Moderation.

Two that come to mind are trade flows and the relative strength of the dollar. As trade deficits have increased, so too have budget deficits, resulting in a recycling of dollars from American consumers to export nations who then bought U.S. treasuries, thereby transmitting the dollars back to the U.S. government. Dollars outside the U.S. tame domestic inflation. That, coupled with Fed policy of hiking interest rates when the economy overheated and the dollar got too weak, has kept inflation at bay.

Finally, an overall slowing of population growth since the Baby Boom of the postwar era may have the biggest impact of all. In Japan, when the population began slowing in the 1970s, after the economy crashed in the late 1980s, no matter how much spending occurred, no matter how much debt to GDP was increased, and the economy barely grew at all and it was all they could do to keep deflation at bay. Europe now finds itself in a similar low-growth environment.

Here, fertility continues to plummet as well, reaching a mere 1.7 births per woman in 2019. At that rate the civilian labor force will almost certainly begin falling as the Baby Boomers retiring from the workforce. That will mean going forward fewer workers entering the labor force over time. Without fiscal or monetary policies or massive productivity gains to otherwise stimulate the economy, one would expect to see natural deflation set in with a shrinking labor force.

The impacts on fertility should not be underestimated. In 1970s, America was a lot younger, with a very large increase in the population of working aged adults. From 1970 to 1980, the civilian labor force grew an average 2.2 million a year, compared to 1.1 million a year from 2010 to 2020, despite the population being twice as large today. That alone easily explains the inflation back then, and the seeming lack of it during the Obama years. Back then there were so many workers hitting the economy, getting married, buying homes and raising families, and making increased purchases as demand spiked.

Since the Great Recession, the opposite has been largely taking root amid the aging workforce and declining civilian labor participation and slower growth of the labor force itself, a trend that would persist until 2016 and the Trump administration when labor participation briefly began climbing, taking unemployment to a 50-year low before Covid struck. Then, deflation kicked right back in and 25 million jobs were lost at the height of the pandemic when labor markets bottomed in April 2020 (17 million jobs were recovered since then).

Therefore, the current policy environment, with near-zero percent interest rates, massive government spending, emergency lending programs, etc. is far more geared to fight deflation than inflation. Right or wrong, that is where the past two administrations have placed their emphasis in the face of the Covid pandemic, and we’re barely out of it yet.

So far, despite a more than 28 percent increase in the money supply, inflation has come in at 4.1 percent in April. It may still have more to rise. A lot depends on how the additional cash is soaked up. Will Biden and Congress raise taxes? Will the Fed hike interest rates? Will we run large trade deficits? Or, with almost 8 million jobs left to recover from Covid, is the depressed labor picture enough to keep inflation tame? Those are all potential headwinds. Stay tuned.

Updated May 25 to reflect the latest M2 figures from the Federal Reserve posted today at https://fred.stlouisfed.org/series/M2SL .