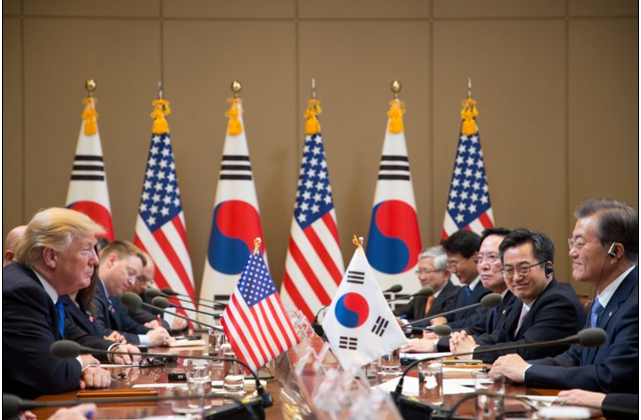 Since 2000, economic growth as measured by the Gross Domestic Products of advanced economies in the U.S., EU and Japan have slowed down markedly amid flattening labor participation, incomes and job creation, and lower interest rates and inflation.

In the U.S., adjusted for inflation, the GDP has not grown above 4 percent since 2000, and not above 3 percent since 2005, according to data compiled by the Bureau of Economic Analysis. [1]

Here, labor participation among working age adults aged 16 to 64 declined steadily starting in 1997 when it peaked 77.4 percent but began rebounding in 2016, according to data compiled by the Bureau of Labor Statistics. In 2017 it stood at 73.3 percent. The population of this demographic has continued to grow and stood at 205.5 million [2] [3] and the labor force was 151 million in 2017.

The working age population 15 to 64 there peaked in 2009 at about 333.9 million and now is down to 327.5 million. [5] There, the labor participation rate has increased among that demographic and stood at about 73 percent in 2017. But even as the population decreased, with the higher rate of participation the overall size of the labor force grew slowly to 240 million in 2017.

The stagnation seen in these advanced economies comes amid overall declining fertility and leads us to ponder today whether robust economic growth and all of the benefits that come with it will be seen again, or even if it can be seen again without adding substantially the civilian labor force.

Secular stagnation and the new normal

In 2009, Allianz chief economic adviser Mohamed El-Erian, when he was still with Pimco, anticipated “coming out of the financial crisis, the economy would not recover in a normal cyclical fashion,” [9] and that “some of the recent abrupt changes to markets, households, institutions, and government policies are unlikely to be reversed in the next few years.” [10]

Instead, “Global growth will be subdued for a while and unemployment high; a heavy hand of government will be evident in several sectors; the core of the global system will be less cohesive and, with the magnet of the Anglo-Saxon model in retreat, finance will no longer be accorded a preeminent role in post-industrial economies.” [11]

Larry Summers too in 2014 recalled Alvin Hansen’s 1939 “secular stagnation” hypothesis, as Summers described it, “the idea that the economy re-equilibrates…” to note that “there is a continuing challenge of how to achieve growth with financial stability. Second, this might be what you would expect if there had been a substantial decline in natural real rates of interest. And third, addressing these challenges requires thoughtful consideration about what policy approaches should be followed.” [12]

For his part, Hansen wrote of secular stagnation in 1939, defining it as “sick recoveries which die in their infancy and depressions which feed on themselves and leave a hard and seemingly immovable core of unemployment.” [13]

Specifically, Hansen was worried about declining populations, writing, “a shift from a rapidly growing population to a stationary or declining one may so alter the composition of the final flow of consumption goods that the ratio of capital to output as a whole will tend to decline.” [14]

After World War II, there was the baby boom, and the secular stagnation hypothesis receded from memory, only to resurface after the global financial crisis of 2007 to 2009, which saw major contractions of advanced economies followed by high levels of unemployment, fiscal tumult and low inflation. Governments and central banks responded with various degrees of fiscal and monetary stimulus. As El-Erian predicted, the economies have not recovered with robust economic growth.

Labor participation matters and must be considered to offset unfavorable demographics

What stands out in the data of the U.S., Europe and Japan, of the three, it is the U.S. stands the greatest chance of being able to restore robust economic growth by tapping into the non-participating population — that is, those not in the labor force — and re-introducing them to the economy.

In Japan and in Europe, even though the labor participation rate among working age adults was increasing, because the working age population was decreasing, the economy was stagnant.

Here, it is also important to consider aging demographics as playing a key role, but not an insurmountable one. That is to say, providing for an aging population will be much easier in the event of robust economic growth than in a case where there is a decreasing or steady number of workers. This study focuses on the working age populations, but gaps younger labor participation can be partially offset by workers retiring later, but this is no long-term solution.

Still, because the U.S. still has a growing working age population, it can stage a turnaround. Therefore, the recent decreases in U.S. labor participation can be reversed, as they have already begun doing so in 2016 and 2017. The decline in labor participation since 1997 had followed an overall expansion of the U.S. labor force since the 1950s as women entered the workforce.

But at the start of the 21st Century, something changed. Male participation continued to decline slowly, as it has for more than 60 years, and female participation began to decline too. Younger workers, middle-age workers, it didn’t matter. This analysis excludes those over the age of 65, Baby Boomers who are undergoing a retirement wave that that has the effect of lowering labor participation.

That is because there is a real dilemma facing the working age population of 16 to 64 years old, since those are the prime working years and whose exit from the labor force may be the most troublesome from an economic standpoint.

Unfortunately, the Bureau of Labor Statistics is projecting even further declines in labor participation through 2024 in a study, “Labor force projections to 2024: the labor force is growing, but slowly.” The Bureau estimated the overall labor participation rate dropping to 60.9 percent in 2024, and to 72.58 percent for 16-64 year olds. In 2017, those figures stood at 62.85 percent and 73.3 percent, respectively. If that were to occur, one would expect growth to be very slow in the U.S.

For that reason, one can only hope this projection is wrong. The good news at the moment is that labor participation among working age adults rising the past two years.

The long-term trend though is still worrying. Whether the weaker economy is leading to the labor force decline, or the shrinking labor pool as a percent of the population is what is holding back the economy, or both, the implication of the Bureau’s forecast is clear, and should be a call to action for policy-makers to find ways to help the current labor participation rebound that began in 2016 to continue. As for Europe and Japan, it will require tremendous baby booms to turn the ship around but in the U.S. there is still lots of room for growth.

On Nov. 15, 2017 President Donald Trump declared after his trip to Asia that the purpose was “to finally — after many years — insist on fair and reciprocal trade. Fair and reciprocal trade — so important. These two words — fairness and reciprocity — are an open invitation to every country that seeks to do business with the United States, and they are a firm warning to every country that cheats, breaks the rules, and engages in economic aggression — like they’ve been doing in the past, especially in the recent past.”

There is much truth to what the President suggested. At the World Trade Organization (WTO), developing economies do not have to play by the same rules as the U.S. The policy, called “special and differential” treatment has been standard operating procedure since Tokyo Round of GATT that began in 1973. Then, the concept was called “non-reciprocity.” [15]

By design, the U.S. has been allowing other economies to ship goods here at cheaper prices, incentivizing development and industrialization overseas, and outsourcing and downsizing in the U.S. The results have been catastrophic for working Americans.

5.8 million manufacturing jobs were lost between 2000 and 2010, [17] when China was granted permanent normal trade relations and a year later entered the WTO, before they began to recover.

During that same period, the U.S. has been losing labor participation among 16-to-64-year-olds and U.S. market share of manufactures exports worldwide [18] — that is, U.S. exported manufactures as a percent of worldwide exported manufactures [19]— peaked in 2000 at 13.98 percent, and has been declining ever since, according to data compiled by the World Bank. In 2016, it was down to 7.91 percent.

Fortunately, with Trump’s determination and commitment to getting better trade agreements and generally to lowering the cost of doing business in the U.S., trends are beginning to turn around.

Since Trump took office, 349,000 new manufacturing jobs have been created. [21] The number of 16-to-64-year-olds who have entered the labor force has increased by 1.9 million, increasing labor participation to more than 73.3 percent for that group.

The U.S. left the multinational Trans-Pacific Partnership in 2017 in favor of bilateral trade deals. Overall, so far, President Trump has closed new trade agreements with South Korea, Europe and Mexico, with more to follow. For once the American people have a president with the attention to the details of these trade agreements to help bring production back to the U.S., which would unquestionably boost the economy.

Trade deficits are subtracted directly from GDP. Since 2000, the U.S. has run $9.6 trillion of trade deficits, [22] which if added back to the GDP, nominally would be $29 trillion instead of $19.4 trillion. The additional growth then could support more labor participation.

There’s a lot of room for growth, in short. Which is why the President’s tax cuts and deregulatory policies can also help to incentivize producing things in the U.S. again. The U.S. has left the Paris climate accords, is rolling back the new and existing power plant regulations. Domestic oil drilling was given a boost by opening up ANWR.

It’s not merely enough to be determined to bring back manufacturing to the U.S., but there must also be a commitment to reducing the cost of business so that it makes dollars and sense for businesses to do so.

More progress must be seen to bring production back to the U.S. if the current trends are to be sustained, however. This is a marathon, not a sprint.

Ideally, the American people would like to see the economy grow robustly. After growing at an inflation-adjusted 4.2 percent in the second quarter of 2018, the U.S. economy could be performing great comeback. It stands a good chance of getting above 3 percent for the first time since 2005, [23] and the rebound in labor participation among 16-to-64-year-olds holds the key.

However, over the long-term, declining fertility as an obstacle to economic growth is a major cause for concern for policy makers. Boosting production here via the Trump trade agenda can help, plus keeping the cost of doing business here low via favorable tax and deregulatory policies. That is, if we truly want to see growth long-term, or if we prefer a future akin to Europe and Japan. Demographics cannot be ignored, for they will not ignore our hopes for the future.

Unlike Europe and Japan, fortunately, at the moment the working age population in the U.S. is still growing, leaving the American people at a fork in the road. The question to ask is: Do we want to grow or not? It’s a choice we’re all going to have to make together. If we won’t, somebody else will.